A state-by-state guide to Ambulance Cover in Australia 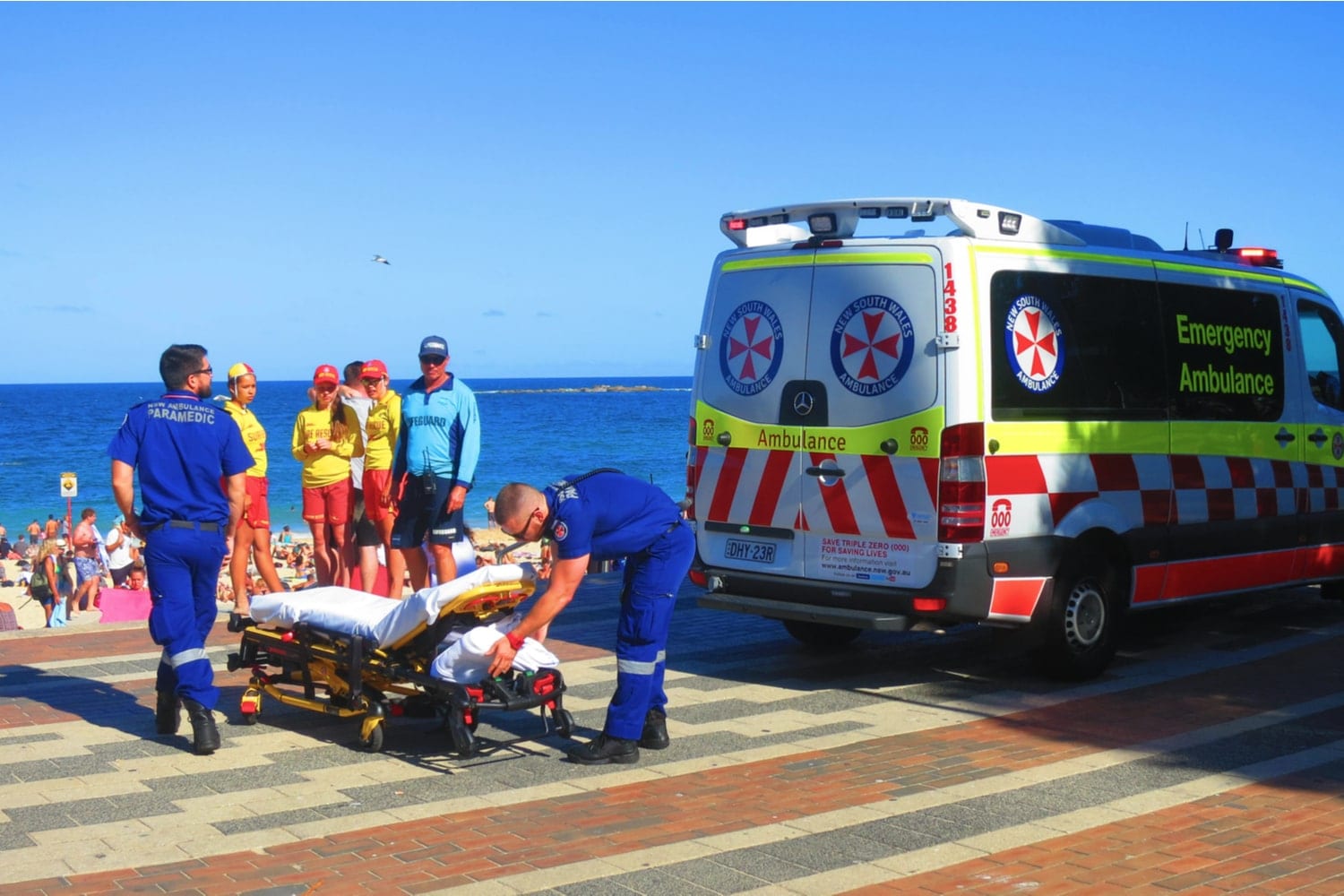 Ultimately, this means that without the right ambulance insurance, you could be facing a large bill for a journey to hospital.

Use this guide to understand what ambulance cover you need depending where you live and how cover works cross-state. It’s useful to compare your health insurance to make sure you’re getting the best possible price.

What is Ambulance Cover?

Ambulance cover is a type of insurance that covers your costs if you need to call out paramedics and be taken to hospital in an ambulance.

It’s really important to note that ambulance fees are very different depending which state you live in. We’ll get into state differences shortly.

What your Ambulance Cover includes can vary depending on your policy and provider. Some offer cover for all ambulance services, while others only cover costs if you need to travel in an ambulance. That’s why it’s a good idea to compare policies before committing to one.

What are the benefits of Ambulance Cover?

The costs associated with an ambulance call out can be high. Some call-out fees cost upward of $1,700. That’s a hefty bill if you’re ill or injured enough to need a paramedic.

The right Ambulance Cover gives you peace of mind that you’re covered and won’t be facing a massive bill in the case of a medical emergency.

Does health insurance include Ambulance Cover?

Yes. Most private health insurers provide Ambulance Cover. This often comes as part of your Hospital Cover. Even a lot of cheap Basic Hospital Cover policies will include a form of ambulance cover.

But the level of coverage varies from insurer to insurer. Some funds provide cover for all ambulance travel, while others may only cover the costs of the emergency transport to the nearest hospital. That’s why it’s a good idea to compare policies before you buy.

Yes! We cover this in more detail below for the differences across states.

This is where it gets a bit complicated. Not every Australian needs Ambulance Cover. Some states provide the whole service for free, while others have a more complex system of calculating your costs. Here’s how coverage varies from state to state.

QLD Ambulance Cover is provided by the state Government. It covers residents for emergency pre-hospital ambulance treatment and transport all over Australia.

So if you’re in the Sunshine State, you can stop reading now and get on with saving money on your health insurance.

Ambulance costs for Tassie residents are also covered by the state government, but only within Tasmania. So if you never plan to leave the island, your government’s got you covered.

There are reciprocal agreements between Tasmania and Victoria, WA, the Northern Territory and the ACT for emergency ambulance road travel. You’ll need to forward your invoice and proof of Tasmanian residency to Ambulance Tasmania and they’ll take care of the invoice.

For other states – NSW, Queensland, and South Australia – there’s no agreement in place, so you’ll have to pay, unless you have the right insurance in place.

If you’re a regular visitor to the mainland, it may be worth getting Ambulance Cover as part of your health insurance. For one-off holidays, it may make more sense to include ambulance cover in your travel insurance.

There are other exemptions, including victims of sexual assault, domestic violence or child abuse, a child or young person under the care of the state, or anyone being involuntarily taken to a mental health facility.

Everyone else needs Ambulance Cover to avoid getting landed with a bill.

ACT does have some very specific exemptions for residents. These are:

Everyone else will need to pay fees.

Victorians with a valid Pensioner Concession or Health Care Card can receive free transport if it’s deemed clinically necessary transport, although this doesn’t always apply if you’re being transported from a private facility.

Western Australia pensioners over 65 get free emergency ambulance services. If you’re Over 65 but not drawing a pension or have a valid Pensioner Concession Card, you can get a 50% discount.

All other WA residents will need to pay the full fee.

Which states charge you for ambulance journeys?

Queensland and Tasmania don’t charge residents for ambulance services. If you live in any other states, you’ll need Ambulance Cover to avoid paying fees.

New South Wales
NSW ambulance costs can be significant. Luckily, residents are only billed for 51% of the ambulance fee – the rest is subsidised by the NSW government – but you’ll still need health insurance or ambulance cover to avoid the rest of the fees.

Australian Capital Territory
In general, ACT residents are responsible for paying their own way, you have health insurance.

Victoria
Victorians will have to cover the costs of an ambulance ride if it’s not covered through an Ambulance Victoria membership or a private health fund.

South Australia
SA residents will be liable to pay for ambulance services, unless they’re a member of the SA Ambulance Service or a private health fund.

Northern Territory
Residents will have to pay for ambulance services unless they’re a member of St Johns or have private health insurance.

Western Australia
The same rules in the NT apply to WA

Can I use Ambulance Cover interstate?

It really depends which state you live in.The Queensland Government covers emergency services for its residents Australia-wide, while Tasmanian residents can only get cover within their state.

Even exempt residents may not be covered outside of their home state, so if you’re travelling interstate, it’s best to check with your state ambulance service, Concession Card provider or health insurer as to whether you’ll be covered or not.

We’ve got a bit more detail on this in the Which states offer free ambulance cover section.

What are the different types of Ambulance Cover?

You have two options: 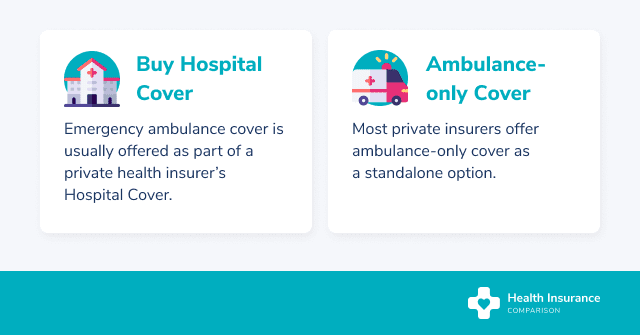 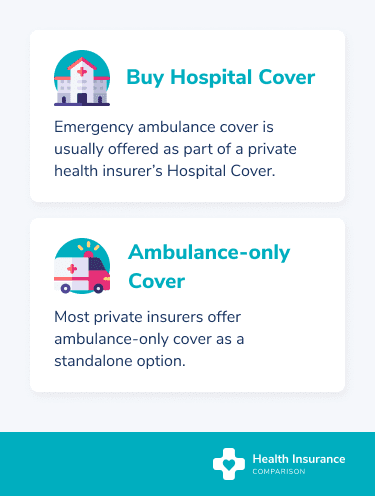 Because different states have different rules around ambulance fees, it’s worth having a chat with one of our advisors to help you find the right cover, at the best price available.

What is the cost of an ambulance trip?

If you don’t have Ambulance Cover, here’s an idea of what you could be paying:

No, it’s not. But if you don’t have Ambulance Cover or appropriate Hospital Cover, you’ll need to pay the full cost of ambulance services.

Medicare does not cover the cost of emergency transport or other ambulance services.

Is standalone Ambulance Cover worth it?

Standalone Ambulance Cover is definitely better than not having any cover at all if you want peace of mind that you won’t have to pay any fees.

That said, you may get better overall value for money by taking out Hospital Cover that may also cover you for ambulance call outs and journeys.

That way, you’ll also be covered for items such as getting a private room or be able to choose your own doctor.

Even if your main priority is to avoid the Medicare Levy Surcharge, a lot of Basic policies will come with ambulance cover.

Most private health insurers include Ambulance Cover in their Hospital Cover policies, but it’s important to be aware of any limitations and exclusions. For example, does the cover include all forms of emergency transport, or is it only for road services?

The best way to find out what is and isn’t included, plus get a great health insurance package, is by comparing with Health Insurance Comparison.

Last year alone we saved Australians, on average, $380.79 on their health insurance when they compared and switched with us.

The different state regulations means Ambulance Cover can be surprisingly confusing. As a general rule of thumb, if you’ve got Hospital Cover then you’ll likely be covered for some ambulance fees. Check with Health Insurance Comparison or your insurer to confirm.

Ready to get started on finding the cover you need? Compare policies with Health Insurance Comparison and let our expert team get you the right cover at our best price.

This guide is opinion only and should not be taken as medical or financial advice. Check with a financial professional before making any decisions.