Can a Himalayan Salt Lamp Improve Your Health? 8 Ways it Might 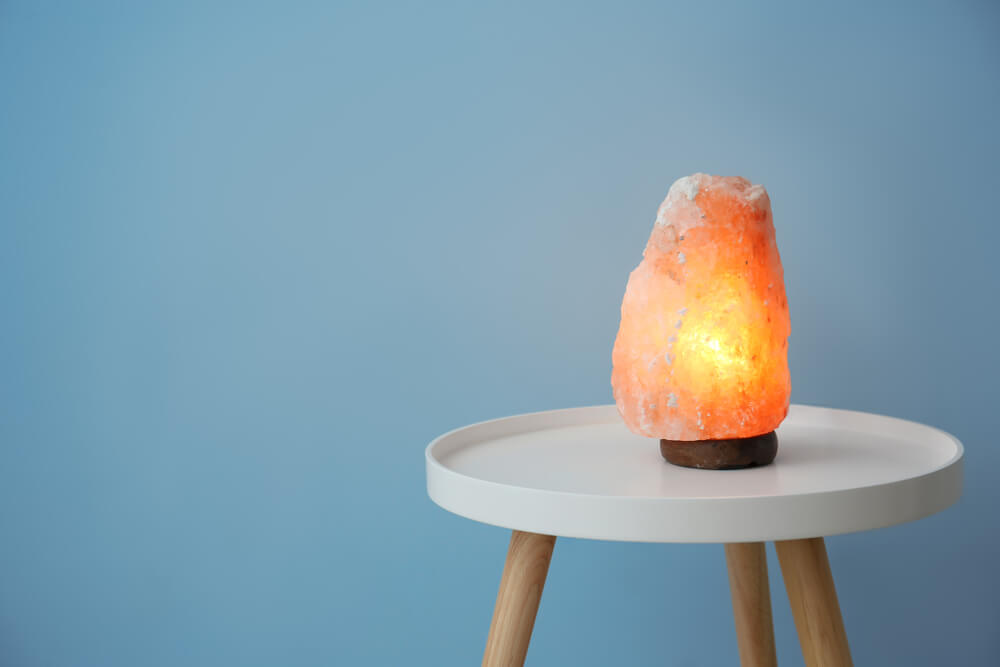 If you’ve ever seen a Himalayan salt lamp, you’d be forgiven for thinking it was a prop from a sci-fi movie set. These ethereal crystal lamps vary in size, but one thing they’ve all got in common is a distinctive pink or orange colour that comes from minerals in the salt.

They may do more than just sit there and look pretty, however. According to popular culture, these lamps do more than light up the room. The salt itself, mined from the foothills of the Himalayas around Pakistan and hand-carved into a lamp, could have a positive impact on your health.

While not all of the health benefits of Himalayan salt lamps have been proven, there are still some good reasons to add one (or several) to your space.

Science doesn’t backup all of the health claims associated with Himalayan salt lamps, but one thing most people can agree on is that they’re nice to look at. When you look at something that’s aesthetically pleasing it brings you pleasure, which feels good. So even if the salt lamp doesn’t do anything else, it’s already bringing more joy to your life.

It’s no secret that we spend too much time looking at screens. Between computers, televisions, phones, and even the overhead lights, human beings are overexposed to artificial blue light. That can lead to eye strain, headaches, and an all-around feeling of tiredness. The Himalayan salt lamp provides a different sort of light, a gentle luminescence that relaxes you instead of wearing you out.

In theory, Himalayan salt lamps work because they’re hygroscopic, a fancy word for the way salt absorbs water from the air. When the lamps are heated up, they are believed to release negative ions into the air. These ions are nature’s way of cheering you up, and can usually be found in running water or fresh air.

Studies indicate that negative ions can affect the serotonin levels in your body, which in turn improves your mood. Negative ions even act as a natural anti-depressant and can be effective in alleviating the symptoms of Seasonal Affective Disorder. Think about how you feel after taking a walk outside—better, right? Your mood is lifted and you feel more relaxed. That’s all thanks to the negative ions you’re breathing in.

These days it seems like we breathe more recycled air than we do fresh air. This can lead to headaches and increase our chances of catching a cold. How can we reduce the effects of recycled air? Once again, it’s negative ions to the rescue. These ions bind with impurities in the air, effectively killing germs.

It’s debatable whether Himalayan salt lamps release enough negative ions to cleanse the air, but you can also boost negative ions by adding live plants or a water source to a room.

Ever notice your allergies acting up more when you’re inside for long periods of time? You might be able to blame those red, itchy eyes and constant sneezing on a buildup of positive ions in the air. Negative ions such as those potentially released by salt lamps can have a sedative effect and act as a painkiller. In fact, a study from the University of Pennsylvania showed that negative ions led to a relief from hay fever symptoms for 63 percent of people.

While the quantifiable health benefits of a Himalayan salt lamp are up for debate—scientists suggest that the lamps don’t give off enough heat to produce negative ions—the lamps still have a practical use. At the end of the day, the Himalayan salt lamp is exactly what it says: a lamp.

They make great night lights because of their soft glow, and are ideally suited for a baby’s room or bathroom. The light isn’t bright enough to stop baby from sleeping, or snap you awake if you have to get up in the middle of the night.

Sometimes, the simple act of thinking positively can be enough to improve your mental state. If the presence of your Himalayan salt lamp makes you feel better, then it’s already working, even if it’s not quite in the way you think it is. Positive thinking can improve your outlook on life, which in turn reduces stress.

Adding a Himalayan salt lamp to your household or office shouldn’t be viewed as a quick health fix. The purported health benefits are debatable, but it’s not going to hurt you to have one. If it makes you feel good, then go ahead and plug it in! As long as you’re not relying on your Himalayan salt lamp to solve all of your problems, you may find that it’s a nice addition to any room.